Last Sunday, I visited Oxford, with a friend, combining a spot of wild swimming in the Isis via a muddy meadow which gave us many Matthew Barney material moments inspired by our recent viewing of his epic, River of Fundament.

We also went to the Barbara Kruger show at Modern Art Oxford in which there were collages of images of mercury filled teeth, as well as installations of texts which helped me to think about a new bookwork which is to be scribed on the parchment-like cow’s intestines that I have been drying in my studio.

Kruger’s use of the imperative got me thinking about how I ‘implicate’ my participants in my performative meals and how I can more ‘direct[ly] address’* them and their bodily functions. In my meals I am not using the imperative, but a more gentle tone, for example, asking whether you can distinguish the different tastes and flavours of Campri as it passes over your palate? Or what it feels like to have two tongues in your mouth? Or are the gut hormones, PYY and grelim, making you want more or is the idea of tripe, your prejudices or past experiences, of offal governing the present one?

In Oxford, we also visited the Pitt River’s Museum where I was able to see many-a-guts inspired artefact.

1. The plaster mould for making wax ex-voto figures of the stomach and its wax positive.

2. Katharine also spotted an ancient Roman terracotta ex-voto of what looked like an intestine with an anus opening. Turns out it was a womb and cervix, which is a shame, but the Katharine thinks I can co-opt the form for my own interests! 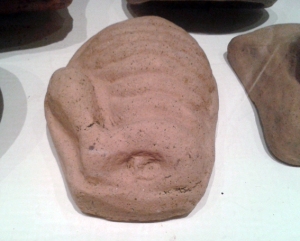 3. And rather amazingly three garments made from seal gut: Two parkas and a cape. All are very brittle and some have been restored using pig intestine, as this is apparently is the closest material to seal gut, but all have beautiful details, embroidered edges and bright coloured furs and threads detailing within the seams. 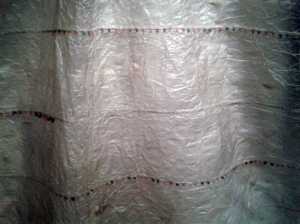 Seeing the gut parkas have clarified some things. I have been racking my brains to come up with the right choice of garment that makes sense with the material, and its, and my history, and which I can feasibly wear during the participatory performance meals. As they dry, the cow intestines have delicate lace-like patterns formed by the variation in fat deposits on the inside surface and the pig’s has lines created by the residue of the mesentery and connective tissues. 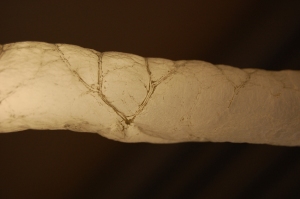 The paperly quality of the dried intestines could refer to stiff blouses with high necks of the Victorian and Edwardian eras. More historically, such a garment could also be connected to the stomacher, which was a panel of fabric worn at the front of the bodice, connecting the edges of the gown.

I could perhaps make a performance piece in which I am eating a (bloody) or juicy piece of meat or offal and the blouse becomes sullied by the activity, (bears some relation to my sugar tea party performances of a few years ago).

* both terms come from the exhibition notes from the Modern Art Oxford show.